Posted on September 21, 2014 by Rajeev Balasubramanyam 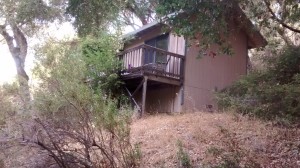 From September 1st to September 14th I did not see another human being. My companions were deer, squirrels and woodpeckers and – though I did not see them – rattlesnakes and mountain lions. Unlike on a 10-day vipassana course, I devised my own time-table. I meditated for 7 hours a day instead of 10, and woke up at 6 instead of 4. But nonetheless, this retreat felt intense, its effects more profound, than any course I have sat. In America it isn’t hard to be in a remote place and I was high in the Santa Cruz mountains among the beautiful redwood trees, like magnificent straight-backed arahants in eternal repose. Every morning I walked up the mountain before returning for lunch,  left in an insulated bag on the ridge for me to collect. By early evening I would break for an open air shower, overlooking the forest, before reading in the sunshine and watching the wildlife.

I never fell out of love with the place, with the deer who came to visit or the trees I watched from my balcony; and I was delighted with the books I had chosen by Thich Nhat Hanh, who has become the spirit-guide for my pilgrimage, and the pioneers of American Buddhism, Jack Kornfield, Joseph Goldstein, and Sharon Salzberg. Except for the occasional insect burrowing into my skin, there was nothing that I could possibly complain about as far as my environment went: The only other variable, then, was my mind. For the first 2 days I was happy and serene, walking the trails, observing my breathing, sleeping well amidst the sounds of the forest. Then on Day 3 I reached some of the deeper layers of my mind… and it began. If I ever needed proof of the truth of the opening lines of the Dhammapada, I had found it:-

And my world had changed. Suddenly, I was in deep misery. There I sat on my cushion, fighting enemies that were nothing but images from my memories or imagination, demons I snarled or shook my first at before opened my eyes and realising there was nothing there but air. Every day I sat with fury, hatred and fear, interspersed with dreams of money, sex, fame, and success, constantly slipping over the knife-edge between aversion and craving. On Day 7 the anger broke and I burst into tears on my cushion. This is the way vipassana works: cruder, grosser feelings are reduced to subtler ones as the mind becomes subtler and more penetrating.

The following day, the anger was  replaced by anxiety and excitement, my thoughts turning to ideas for books, to  future plans, to leaving. Without a teacher staring at me from the dhamma seat, I found myself reaching for my notebook, scribbling down ideas, unable to stop. There were days when my craving for pleasure would disappear until I realised it had been replaced by a subtler longing; for wisdom, for enlightenment, for spiritual prowess.

By Day 12, I was wandering around the ridge in a state of deep sorrow bordering on despair. I had failed, I felt, or worse, this life was a failure: I should have been a person filled with joy and peace, childlike and happy, but instead I was this this adult torn apart by fear and longings that would never be met fulfilled.

However, even though I was drowning in these feelings, there was an awareness outside of them, more expansive, bigger than this ‘me’. This awareness knew that my sorrow would pass because it knew that everything would pass. All I had to do was to listen to this awareness, and not to my mind.