Posted on September 28, 2014 by Rajeev Balasubramanyam

I have arrived at my last scheduled retreat, at Crestone Zen Monastery. It has only been ten days since my very intense experience at the Vajrapani Institute, and since then I have travelled from Santa Cruz to San Francisco to Seattle to Denver. I have launched a new book, too,  STARSTRUCK, reading to a live audience over satellite from my cousin’s living-room (who, fortunately, works for Microsoft so could ensure there were no technical problems). In Seattle it was also my enormous pleasure to finally meet my writing mentor, Charles Johnson, grandfather, kung fu practitioner, National Book Award-winning author of Middle Passage,  and Soto Zen master (serendipitous as I happen to be in a Soto Zen monastery). 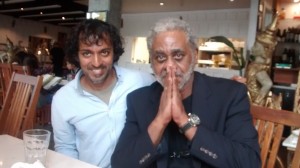 With Chuck Johnson: one of my spirit guides for this pilgrimage

Two days ago I flew into Denver and was reunited with my old neighbours from Hong Kong. Yesterday, the three of us drove south through Colorado, passing forests splashed with yellow from the aspen trees, and slate-grye mountains topped with tundra. There was wildlife everywhere, deer, lions, bobcats, bears, elk, eagles, and ‘real Americans’, meaning cowboys, gun enthusiasts, bow hunters, and Tea Party members flying the Tea Party flag from their homes. We had lunch in South Park, which I did not realise was an actual place, and met a teenage boy who had hardly ventured outside of Colorado  and had never heard of Crestone but, when I told him about my pilgrimage, said, ‘That’s awesome’, and pressed his hands together in the form of a lotus by way of saying goodbye. 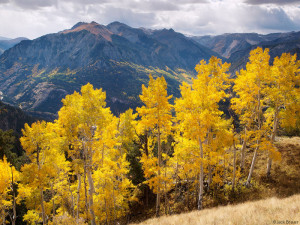 Our last pit-stop was at a marijuana store (legal in Colorado!) though only to use the bathroom, and then we were in Crestone, 8400 feet high, and far away from anywhere. Known as the Shambhala of the Rockies, Crestone has a stationary population of only 74, yet is home to a long line of spiritual retreat centers, including the Nada Carmelite monastery, the Sri Aurobindo Center, the Haidakhandi Ashram, several Tibetan monasteries, the Shumei International Institute, and – my new home – the Crestone Zen Mountain Center.

After saying goodbye to my friends, I was given dinner in the kitchen, and shown around the incredibly beautiful center, furnished with that unique Japanese-Zen aesthetic that I find at once cold, beautiful, profound and intimidating. But it was not just the monastery: even as we drove into Crestone, I could feel it. I have heard people say – even hardened skeptics – that Crestone has a powerful vibration, and now that the altitude sickness has worn off I can confirm this. Meditating here is different.  Crestone is different.

My new cabin is cuter than the one I became so attached to the Vajrapani Institute. Built entirely out of pine, it has a tree trunk running through it, and a low table along one wall, in front of which I am sitting  cross-legged on a meditation cushion and writing , Behind me is Japanese lamp, some framed calligraphy, and a tea set. To go to bed I have to climb down the ladder to my left, and swing myself onto an underground bunk. I love doing this. I love this cabin.

The incredible Dome where I meditated today

There is a retreat on, and while I eat the excellent, yet simple Japanese food in a cosy atrium, the retreatants eat oryoki style in the dining-room adjacent (which means I can observe them). Zen, I am learning, is highly ritualistic; blocks of wood are bashed together at intervals, everyone kneels, bows and chants, and most wear robes. Thus far, I have attempted to read two books on Zen and have given up. Phrases such as ‘What is an orange? You are, when you are a mountain,’ don’t mean much to me, and I am aware that my efforts to try to understand are counter-productive. Instead, I have discovered a copy of The Snow Leopard in the library. It feels appropriate.

About half an hour ago I finished zazen in the zendo, meaning I meditated with the monks and students in another extremely beautiful hall. Again, it was highly formalised, with lots of bowing, but I was told it was fine for me to practice vipassana: there is no contradiction in Zen. I was aware that I was probably not following the procedure correctly, and was a little frightened someone might come up behind me and hit me with a stick, but this never happened: everyone seems pretty relaxed here, despite being so formal, and very kind. Oddly enough, I had not even realised that they are all white Americans. For some reason, even though I could see them, I had thought of them as Japanese.

The Zendo: meditating facing the wall

This reminds me of something I was told while visiting Stanford, when a group of people were attempting to convince me of the validity of ‘conscious capitalism’ and ‘mindful consumption’. Steve Jobs, apparently, had decided to become a Zen monk, but was talked out of it by his master who told him that his future lay in business. A friend of mine then pointed out that the design of the iPhone reflected Jobs’s grounding in Zen and laid his phone on the table and – I had to admit it – it was palpable. Nevertheless, it feels to me that, in America, meditation, or ‘mindfulness’, is often marketed as a means of increasing productivity and efficiency, i.e. as a way of making more money, and I am suspicious of this. Nonetheless, perhaps it is better to have mindful capitalist visions than mindless ones: perhaps this is a start at improving modern society. I don’t know.

In any case, here I am, typing online on a lap-top in a Zen monastery in the Colorado mountains, This, in fact, is the part of my Fellowship where I a required to integrate my writing with my meditation as so, while here, I will meditate five or six hours each day, and write the rest of the time. This process of integration fascinates and concerns me: I am wary of becoming an explicitly ‘spiritual’ or ‘Buddhist’ writer (even though I do not think of myself as either of these things), but I do feel that the practice of vipassana can help me to be more empathetic and compassionate, which can only be of benefit to a novelist.

Over the following two weeks, I will reflect on the relationship between writing and meditation, and will continue to share these ‘live-posts’ with you (this is first time I have posted while actually on retreat).Without question, I am in an extraordinary and powerful environment, and it is impossible to say what these two weeks will bring,

One Response to American Pilgrimage #15