Posted on September 30, 2014 by Rajeev Balasubramanyam 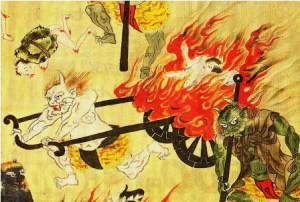 Every morning, here in the Crestone Mountain Zen Center, I have a nightmare. The theme is always the same, though the actors vary. Someone close to me is bullying me, full of hatred and anger. I am filled with horror and anguish; I wake up terrified.

I am aware that the meditation is causing this. As I observe my breathing I penetrate to deeper levels of the mind, unlocking demons. But, as a product of the western world, I can’t help trying to analyse my dreams. Why this person? What does it mean? What does it say about me, about my past, about the future? Eventually, I give up trying and attempt to go back to sleep, but my mind keeps returning to the dream, or to other obsessive thoughts, and so I go back to my breathing in search of some respite.

But this morning was different. This morning, the second I woke up from the dream, still filled with dread, I saw it for what it was. A dream. A product of the mind. Nothing but a bubble to be popped. And so I popped it. I let it go. The dream was not reality; the dream was not ‘me’. It did not need to be analysed or probed for meaning.

One of the last things my writing mentor, Chuck Johnson, said to me in Seattle was: ‘I like to think of the mind as just another organ, like the bowels. It produces stuff. We don’t tell it to, but it just does it. And sometimes it’s flatulents; sometimes it is something else.’

So this was all my dream was. A fart in the night. Nothing to be taken seriously. 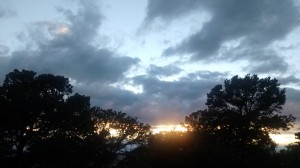 After the thunderstorm: Zen sky

Yesterday I went to a lecture in the Zendo given by one of the monks. He said that in the western world in particular, we don’t consider an experience to be real until we have processed it intellectually. He used the analogy of young teenagers who have to validate their experiences by videoing them and posting on Facebook. But we adults know that Facebook is not reality, and yet we think the intellect is, and that anything that takes place outside the intellect is somehow invalid. But meditation practice shows us that experience need not involve the intellect; indeed, experience is often fuller and truer when the intellect is not involved.

And so it was with my dream. I did not bother thinking about it. I let it go. And I was free from the delusions my mind had prepared for me, the traps it had fashioned to trick me into multiplying fear and anxiety.

Indeed, I was about to go back to sleep, when I heard the Han.

It has taken me a few days to get used to the Han. Before Zazen (sitting meditation), a monk in the full Japanese robes they all wear hits a wooden board with a mallet to announce that the session is starting. He begins by hitting it once, and then again and again. Eventually the rhythm quickens until it sounds almost like a single beat, and then he begins again, slowly.  The idea is to get to the Zendo before the second cycle is over, and this morning, for the first time, I made it into the hall at 5.00 a.m. 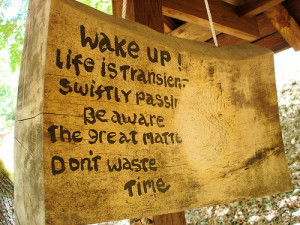 The Han: to be struck with a mallet

But I am beginning to understand that this develops awareness, even if it feels relentless and disciplinarian. One of the robed meditators I have met here used to be in the marine corps, which didnot surprise me. Aged 18 he was desperate to go to Vietnam, so he made sure he was first in the queue, not realising that the first 20 would be sent to Okinawa, and the rest to Vietnam. And so he ended up in Japan and took Karate lessons in a Dojo where no-one spoke English. At the end of every session they would meditate, Zen, and he would join them without the slightest idea of what it was. Forty years later, having become an anti-war activist after returning to America, he rediscovered Zen in Crestone.

The Zendo in winter

I have stuck to my plan of meditating four to five hours a day and writing the rest of the time, but what I realised today was that now, almost two months into my pilgrimage, I am beginning to find monastic life fairly easy. It isn’t hard to walk around the balcony of the Zendo in the freezing cold at 5 in the morning in sandals; or to eat what I’m given in whatever quantities it is given to me; or to talk to no-one for hours (though I’ve had some good conversations too); or to live like a hermit in my pine-hut cabin; or to observe my  mind when it is filled with demons or restlessness.

I started this pilgrimage with a certain faith in the dhamma, but now what I have is an ability to observe my thoughts, feelings and emotions and to see their impermanence, to let them go, as I let the dream go. This, I think, must be progress, but I know there is far more to come. With vipassana, as with life, just when I think I’m on top of things, I’m thrown something that pushes me to my absolute limits and reminds me of my fragility and vulnerability. I wonder what that next thing will be.