Posted on December 8, 2014 by Rajeev Balasubramanyam

I left the United States a month ago, but haven’t posted since as I’ve been processing the experience. I have also begun a new novel, something more comedic and satirical than the last, perhaps reflecting a need inside myself not to take this spirituality business so seriously any more. I haven’t posted because I genuinely didn’t think I had anything to say, and this post is about saying that, which might be ridiculous, but I don’t like the idea of not posting for so long. It feels rude.

Among the more important truths (how I am starting to distrust that word!) I’ve encountered, is this: if spiritual practice is taken too seriously, it becomes self-defeating. I think humour is essential, but also a recognition that we could be wrong about almost anything at any time, that doubt is a much-needed companion to faith. Fundamentalism is everywhere, especially today, and can accompany any belief system, not only a spiritual or religious one.

But how could it be otherwise? I’ve never experienced nirvana, or absolute contentment or happiness. What I have experienced, every day of my life, is a certain amount of confusion and uncertainty, and some anger, sadness, anxiety, and fear, as well as some joy, passion, love and laughter. Every single day is like this. And that’s because I’m human, and I’m imperfect, and it worries me that people – myself included, because it’s a part of being human – are constantly seeking ways out of confusion and imperfection via ideology, via fundamentalism.

When I think about myself, I realise I have constantly been waiting for that moment when I could say to myself, ‘Yes, that’s it! That’s the answer’. And for a while I thought I’d found it in vipassana. But now, I’m not sure there is an answer. There’s just life, and the only certain thing is that we’ll die one day. Perhaps Buddha did find a way out: I don’t know: I’m not him; and I won’t take anyone’s word for it.

Looking back on those three months in America, I remember a series of incredible, wonderful experiences, of true and deep friendships, and of learning new truths which, in comparison to an absolute or total truth, were tiny raindrops against an ocean. Everything is subject to doubt and imperfection, to error. Everything is in a state of process and flux. And at the same time, nothing really changes. The absolute condition remains the same. We live in ignorance and uncertainty, between doubt and faith. That’s what being human is.

I don’t know what else to say other than that I’ve learned not to expect too much, and to realise that life is to be lived, that to expect to understand it is probably asking too much. I think that vipassana is a good thing; it has done me a lot of good; but it isn’t everything, and I think I actually learned this through meditation.

On my last retreat at the Zen centre I had a moment – a moment that lasted quite a long time – when I felt that if I heard the words ‘Buddhism’ or ‘spirituality’ once more I would start screaming, but my only way to cope with this was to sit quietly on the floor and observe my breathing. So there we have it: meditation is a tool and it works, but it isn’t everything. Nothing is. And perhaps if, one day, I do experience the ultimate truth, I will look back on this realisation with approval.

Nowadays, whenever I hear someone speaking with utter conviction and utter seriousness, about almost anything, my first impulse is to laugh because it feels like a denial of our own humanity, a desperate reaching for certainty, a neurotic reflex prompted by terror at our own condition. And all I can think is how terribly funny this is, because we’re all in the same boat, all utterly confused, and all pretending we’ve got it figured out. I’ve heard that the moment a great mystic reaches nirvana his first impulse is to laugh and I’m not sure I quite understand this, but I can definitely believe it. 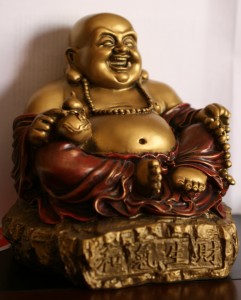