Posted on July 27, 2014 by Rajeev Balasubramanyam 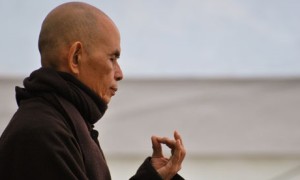 “To be beautiful means to be yourself.You don’t need to be accepted by others. You need to accept yourself. ” Thich Nhat Hanh

On August 6, I will arrive at Thich Nhat Hanh’s ‘Deer Park Monastery’, outside of San Diego. For the first 5 days, I will join up to 250 others in a special ‘People of Color’ retreat , to ‘learn concrete ways to embrace, transform, and heal our own suffering, ancestral suffering, and institutional oppression.’

When I first heard about this I could barely contain my excitement. I told  my friends about it, many of whom were delighted for me, though I experienced a couple of disappointing responses too. A German friend said angrily: ‘Can you imagine a retreat just for white people! Only in America!’ And an English friend, in a more euphemistic style, said, ‘Oh, and are you OK with that?’

It strikes me now that though these were negative responses, they were also expressions of bafflement and non-comprehension, and perhaps invitations for me to explain, invitations which I rejected.

And so, in the spirit of friendship, I’ll try to explain.

I was born and grew up in what I sometimes describe as ‘darkest Lancashire’. The darkness does not refer to colour (my family were the only dark-skinned people for miles around) but to the sheer volume of hatred directed towards us. It was rare to leave the house without being verbally abused. We had Union Jacks posted through our letter box, stones hurled at windows, our property vandalised. ‘Go back to your own country,’ was a sentence I heard every day, along with the epithet, ‘Paki!’, hurled like a bomb as I walked down the street.

I had only white peers, none of whom could relate to my experience. Worse still, even my friends would make racist jokes and sneers. The culture supported them, and it many ways it was my culture too, so I grew up feeling ashamed and self-hating.

At home, I was raised with values typical for many first generation migrants. ‘Beat the bastards at their own game’ was my father’s motto, who experienced a similar situation at his workplace, albeit couched in the subtler language of adults. His solution was to work harder than them, to surpass them, and I was expected to do the same.

I did. I got good grades, played badminton and cricket to a high standard, and stayed out of trouble.

When I was sixteen, however, I rebelled. I started smoking, and drinking, and taking drugs. I developed values of my own, distinct from those of my parents. The hardest blow I ever dealt my father was when, having received an acceptance letter from Oxford, I told him I did not want to go. I had other dreams, of travelling, opening my mind, reading, writing, encountering new people. We settled on a compromise. I would take a year out, and when I came back, I would go to university.

I went to Southern Africa, ostensibly to do some work for my uncle’s NGO in Zimbabwe, but I ended up going AWOL in Soweto instead. For the first time in my life I was around people who were neither white nor family members; people who accepted and liked me for who I was; people I identified with; people I did not fear. Over beer and enormous joints rolled in newspaper, we talked about politics, about how the system worked, and I began to engage with racism on an intellectual level.

At Oxford, my chosen college turned out to be among the most right wing in the university, and more than a little racist. Initially, I managed just fine, mixing with mostly middle-class white people, going  to parties, getting drunk, studying. But then there was an incident.

I was in a friend’s room, watching the TV with several others. A black rapper was invited to take off his shirt by the presenter and pose for the crowd. One of the others in the room said, ‘God, these black men are so sexist.’ I protested that he had done nothing, said nothing, and was met with scorn. So I put on my shoes, left the room, and, literally and metaphorically, never came back.

A switch had been flipped. Years of anger, repressed since childhood, came flooding out. And from that moment on, I was angry, angry about racism.

I was still angry six years later, when I tried to write a second novel about Lancashire. I had to revisit my childhood, recall feelings and events I had hidden in a box for years. I struggled; could not finish my book; ran out of money; drove myself harder and harder, refusing to stop, refusing to let go.

Six years on, burnt out, and on the brink of despair, I discovered meditation. I allowed myself to observe my anger instead of expressing or repressing it, initiating a process of healing which continues to this day. I have let go of most of my anger now, but subtler feelings remain locked inside that box – sadness, sorrow, grief – and memories too,  ones I have been to afraid to revisit.

And so I am going to America to open my box, to allow my heart to break, and I have a safe and loving environment to do this in, surrounded by others who have come to do the same. There are millions of people like me, torn apart by racism, punctured by wounds that have never had the space to heal. For many of us at the retreat, it will be the first such opportunity in our lives.  Perhaps my German friend was right: ‘Only in America’ can this happen. In Europe talk of racism is close to taboo; society denies it; the media ignores it. And so I am glad to be going to America, glad, excited, nervous, relieved, and truly grateful.