Posted on May 22, 2016 by Rajeev Balasubramanyam

I leave for New York in four days. I remember the feeling I had the first time I visited the city. It was like being hit flush in the face by Cupid’s bat. A violent, instantly addictive love. I can’t deny it: to be enamored of New York is to be enamored, at least in part, by capitalism. And capitalism’s  charms are not to be underestimated. It’s like a overwhelming charming stranger you know is only playing you, will discard you when you’ve exhausted your uses, but you can’t help yourself. That’s how charming this stranger is. It’s a delicious, intoxicated madness, a wilful, glorious folly. 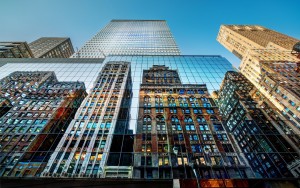 But I am going there to practice meditation, and I have to admit this sounds absurd. In my defense, all I can say is that this is the world I live in — the modern world, the capitalist world. I can’t escape it. In fact, it’s virtually the only world I have ever known. But in New York we find it in concentrate form, that worship of success, those celebrities floating above us in penthouses halfway to the heavens, that boastful phallic skyline, the coexistence of the richest and poorest, the ‘winners and losers’ of life.

It’s all based, I feel, on the most dangerous delusion there is, one that seems guaranteed to leave  everyone unhappy in the end. It’s the delusion that, as human beings on this planet, we are in competition with one another ― that my happiness can only be at the expense of another’s, that my value can only be measured in comparison to yours. I think of it as the delusion of separateness, or in more Buddhistic terms, the delusion of self itself.

According to the Buddha ‘we’ are mere aggregations of khandas, like whirpools in a river than come together for a time and then dissolve. There is no distinct self, no ‘I’, only the delusion of it and, as we practice, as we gain greater insight, this delusion becomes  weaker and weaker. The Buddha, I believe, also said it is an error to think of ourselves as  inferior, superior, or even equal to anyone else, which makes perfect since if we are not, in fact, separate. As a result, low self-esteem, inferiority complexes, narcissism, grandiosity, and arrogance all have the same root. The illusion of separateness.

Low self-esteem is something I’ve suffered from since childhood, a belief in my own inferiority relative to others, the consequence of relentless racism and the belief I was raised with, that the only way I could prove my worth was via achievement as opposed to simply being me. As such, I learned to despise those parts of me that were less than perfect, and to only value those parts that delivered results, success, which, by it’s nature, can only be short-lived. It’s the tragedy of the immigrant of colour – you works as hard as you can to disprove your inferiority, yet no matter how successful you become, the feeling never truly leaves you. All that happens is your become more narcissstic, more insecure, more obsessive about the need to prove yourself.

The cause lies in the root belief that one is separate from others and that life, as a consequence, is a competition, and it seems to be that New York was built on this assumption. Those magnificent buildings and limousines are symbols of superiority, and so of separateness, and so of tremendous, inescapable insecurity. What goes up, after all, can always come down, and the self-proclaimed victor  always has a million pretenders nipping at his heels.

I have found that relief only comes when one begins to let go of the delusion of separateness, of self. Of course this is a lifetime’s work, or more, but I know that the less attached I feel, the more peaceful I feel, and vice versa. I know when I’m improving in this regard because I begin to delight more in the success of others, and to feel a greater sense of compassion for those who are struggling. Simultaneously, I find I have less need to conceal my own failings and pain too, for shame is another consequence of the illusion of separateness. It is, as far as I can see, the only way out of this emotional rat race, and as difficult as it is, it does, unlike the obsessive pursuit of success, result in greater happiness. I suspect there are many New Yorkers out there who are coming to similar realizations. I look forward to meeting them.