Posted on June 5, 2016 by Rajeev Balasubramanyam 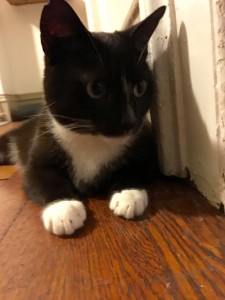 I have a room in New York Zen Center now, which I share, at nights, with a deaf cat called Tika. She is very friendly. We wake at six each morning for zazen and sit for 35 minutes followed by kinhin — walking meditation — after which we sit again. I’ve been told to sit with my legs parallel rather than one folded beneath the other, with my thumbs touching, left hand beneath the right. Sitting this way means my back is always straight (I used to slouch, a lot).

On my first day I got a terrible cramp and extended my leg halfway. The monk sitting up front instantly announced, ‘Maintain perfect stillness’. Zen is strict, but I like it, this discipline. My meditation has become undisciplined of late. When I was sick I barely meditated at all. Sometimes I would spend most of my time making mental lists of things to do, or else I would open my eyes and start writing an email on my phone, sometimes getting up and going to my laptop, my head too full of stress and worry to finish sitting. Before I came to the center I had been meditating only for an hour a day instead of my usual two, and often I would doze for much of it.

But now I have no option. I have to be in the zendo for zazen twice a day, morning and evening, and it’s easier to concentrate there, surrounded by serious and dedicated practitioners. It was different two years ago when I went to California: I was ready then, ready to meditate seriously. But I have come to New York exhausted, needing rehabilitation, needing to find myself again.

The residents of the center are easygoing, gentle people, though more down to earth than their Californian equivalents. We eat breakfast together after zazen, cross-legged around a large table, after which I take my backpack and head out into New York City. The contrast is striking.

The Zen Center of New York City: Fire Lotus Temple is the city branch of Zen Mountain Monastery, the main house of the Mountains and Rivers Order.

Yesterday I saw was a man jump down form his truck and take off his belt, moving to smash the windscreen of the car behind him. Two days ago I asked for directions and a man told me: ‘Get the f- out of here you piece of shit. Mind your own goddamn business.’

I’ve met lovely, kind, New Yorkers too, but sometimes I feel that any of us could punch anyone else at any time. It’s the energy of the place, the vigour, the aggression, the fear, the competitiveness. On my previous visits to New York, I was in awe of the city, glamorised, seduced. But now I’m living in a zen center. My focus is different. When I look at people on the subway, it becomes so obvious. So many New Yorkers are suffering terribly, unhappy, desperate, exhausted. Of course, these things are true of everywhere, but in New York the struggle for survival is so sharp, the competition so fierce, the pays-off so large and the distance to fall so great, that it all feels so much more intense, as if every second must be spent getting ahead while the rest is ‘downtime’, a rare hour or two to recharge before returning to the front-line.

By coincidence (if such a thing exists) I have been living like this for weeks, or perhaps months, neglecting my meditation and my health, pushing myself as hard as I could, trying to use every hour productively, sleeping only because I had to. And I chose this. If someone else ordered me to work these hours I would have rebelled, called them a sadist, and yet I did it to myself. I realize now that I large part of my motivation behind living like a New Yorker was to hide from my emotions, to dull my awareness, a process I am slowly reversing now. But if I said this to many people here I’m sure they would reply that they have no choice.  They have to work this hard. They have to survive. Rents are rising. Healthcare is literally extortionate. Everyone with a degree seems to be in debt. Homelessness and destitution are real possibilities for so many people.

As far as meditation goes, the corporate line is that if sitting for some minutes a day helps us to work more productively and for longer then everybody should do it, and here’s a $10 app, a $70 dollar cushion and a $100 class. It’s true: meditation can help meet all these goals, but as I’ve remembered over the last week, it does more than merely calm the surface of the mind. Practiced regularly, it begins to transform the mind, helping us become more aware of our suffering, of how we have caused it, how we can heal. Already in the center I have met one young man who used to work on Wall Street and another who  works in advertising but is preparing to live in a monastery upstate for a year.

I am not suggesting we all become monks, or that we all have a choice, only that meditation  delivers a different worldview, one based less on success, achievement and the primacy of work than on liberating the mind, on love, compassion, kindness, and happiness as end goals, of recognizing that we are not separate from one another, that senseless competition and aggression make us all unhappy.

At the end of evening zazen, one of the meditators chants the following words:

Let me respectfully remind you
Life and death are of supreme importance
Time swiftly passes by and opportunity is lost
Each of us should strive to awaken….
Awaken….
Take heed.
This night your days are diminished by one.
Do not squander your life.

I wonder what would happen if, instead of the pursuit of money, fame, sex and immortality. these sentiments were to become the dominant paradigm of our era. What would New York look like then? Even with the shadow of Trump looming over the city, it’s not so ridiculous an idea. Today, on the subway, a young woman was giving a speech about how humanity has fallen, become wicked, how we need to be saved, how these are desperate times. ‘I’m not angry,’ the young woman continued, ‘I’m passionate’. Though most people looked as if they were ignoring her, I know they heard her. It was impossible not to.