Posted on July 3, 2016 by Rajeev Balasubramanyam

Two weeks ago, I arrived at the Vermont Studio Center, a retreat for writers and artists which, as far as I knew, had no connection to meditation. A day after arriving, however, its founder told me he had set it up with meditation in mind, and that the famous Karmê Chöling monastery was nearby. Karmê Chöling was Chögyam Trungpa Rinpoche’s first monastery in the USA. I’ve read so much about him in the last two years after visiting his old headquarters in Boulder, but I’d forgotten he was originally based in Vermont.

Trungpa was a Tibetan monk who fled Tibet after the invasion and studied in Oxford before coming to America where he founded Naropa university and the shambhala teaching method. He left a colourful legacy behind, stories of drunkenness, wild teaching methods, and sexual liaisons with students. During the course of my travels, however, I have never heard anyone speak badly of him, unlike so many other teachers whose names have been tarnished by scandal. Everyone agrees that he was entirely open about what he did, and very powerful. Most report their meetings with him as terrifying, not because of anything he did, but because he functioned like a mirror to the self, showing you all that you were trying not to see. When he died in 1987 it was a huge trauma for his lineage, and his funeral was in Vermont, only 45 minutes away from Vermont Studio Center.

The following morning, one of the residents told me she was about to drive there, and asked if I’d like to come. Of course I said yes, and we arrived at the monastery at around 11 a.m., just as a long retreat was finishing. It was on a forested hillside, and we instantly felt a very different energy there, powerful but gentle, very peaceful. We met a woman from Wisconsin who, by coincidence, was about to become the spiritual mentor of the person I’d travelled there with. She took us on a tour of the area, and showed us the spot where Trungpa’s funeral occurred during which thousands reported seeing a horizontal rainbow appear on a sunny day quite free from rain.

As we walked away, our guide said something which encapsulated the thoughts I’d been having since arriving in America few weeks ago. ‘The essence of our practice,’ she said, ‘is kindness — learning to embrace our essential goodness.’ This is exactly what I have come to believe. When we’re being kind, we’re happy in a way that’s free from grasping, in a way that, unlike sensual pleasure, cannot be transformed into misery.

There are four components to vipassana. 1) Sila, or morality, meaning not harming others 2) Samadhi, concentration, essential for awareness 3) Panna, the main technique whereby we undo the negative habit patterns of the mind 4) Metta bhavana, or loving-kindness. I’ve come to the conclusion that the last part is the goal, the core reason why we practice, to try, in every moment, to increase the flow of kindness and reduce the flow of unkindness. To do this, we have to do the others: avoid harming others, be aware of the contents of our minds, and reduce anger, fear, anxiety, and greed. Without question, meditation has enabled me to be kinder to myself and others, though I still find myself falling prey to unkind thoughts on a regular basis. And it’s far easier to be kind to others when they are kind to you, when life isn’t posing any real challenge, something I learned the hard way on June 23rd, when Britain voted to leave the European Union.

Like many others, I felt disgusted, disappointed, worried, and angry. As I’ve written before, I grew up experiencing the worst Britain has to offer, intense racism and xenophobia, hatred, rage,  cruelty, abusiveness, fear, ignorance, and unkindness. The Brexit vote brought it all back, all the trauma, all the bad memories. I did not post last Sunday because I was too full of rage. I’d have written ‘I HATE YOU’ a thousand times, which wouldn’t have been of much use to anyone. I joked later that I should probably have been in prison, so unhinged did I feel.

Amidst all the rage, however, I knew I had to stick to that core intention of being kind to myself and others. This meant not condemning myself for my anger, recognizing these feelings as understandable, as part of being human. Unfortunately, this meant seeking to extend that same understanding, that same kindness, to racists, xenophobes, hypocritical liberals, British nationalists, imperial apologists, unscrupulous journalists, mediocre politicians , Nigel Farage, Iain Duncan Smith, and Donald Trump. This was harder. It is far harder to be kind to someone you feel threatened by, or who you feel has done you wrong. But most of the time, at least, I have the intention, and this is something I won’t let go of. 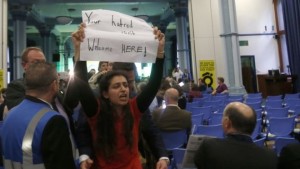 Kindness  isn’t a question of desert. If we are unkind to those we feel deserve unkindness, we increase the aggregate flow of unkindness.  If I find a BNP member and punch him on the nose, he’ll wake up angrier and more hate-filled than before, more unkind. This is how it works. Acts of kindness and unkindness multiply exponentially. It’s why our actions matter so much, why our actions affect everyone else. The other residents at Vermont Studio Center were so kind to me, and their kindness helped me be kinder to myself, to recover, to go to that meditation hall and observe all that anger and hatred, gently opening the door in case they felt like leaving. I am grateful to them, and to my meditation.

Thankfully, I’m about to sit another 10 day vipassana course in Montreal from Wednesday (which means I won’t be able to post until the 17th). I’m glad that in this disturbing and difficult time I still have my meditation, this dhamma that does not care about about Farage or Brexit or Trump, whose only goal is to replace hatred and rage with love and compassion. 30,000 people protested in London yesterday, but I see my upcoming meditation course as having an equal value. Today, America and Europe are under great threat from the far right, a phenomenon we could describe as organised unkindness. By meditating, by trying to cleanse our minds of anger and hatred, we are fighting back. Meeting unkindness with kindness is the only sure way to defeat it. 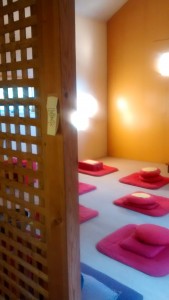