Posted on August 3, 2014 by Rajeev Balasubramanyam 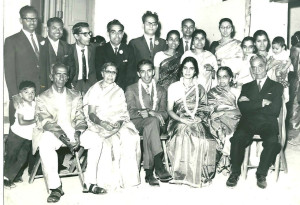 My parents are front centre; my paternal grandparents to the left, maternal to the right.

I have printed and framed the above photograph to put on the ‘ancestor’s altar’ in Deer Park monastery on Tuesday. In Vietnam, every household has such an altar; its purpose is to help us feel more connected, free from the illusion of separateness.

My initial concern was that, having grown up in England, I lack a strong connection to my ancestors. I saw my family only on visits, those interminable Air India flights that felt like going to the moon. The intervals between visits were long for a child, and I remember being greeted by relatives at the airport and wondering who they were. I also recall a warmth and affection I was unused to; given freely and for no other reason than that we were related.

As I grew older, I made trips to India by myself, asking questions, looking at family trees and albums. But that feeling of alienation and loneliness did not go away. I had grown up outside of this family, and that could not be undone. I remember one incident in which an elderly relative, mostly blind, said something I did not understand, and my cousin cheekily told her to speak in English, to which she countered, ‘Then tell him to get an English grandmother’. My cousin laughed, not realising how painful I found this.

At university, I was busy educating myself about racism, reading Malcolm X, James Baldwin, Maya Angelou, and also Bhimrao Ambedkar, the untouchable, or dalit, leader who encouraged his people to convert to Buddhism, away from the casteist Hindu religion. I read about centuries of genocide, about apartheid laws sanctioned by the Vedas.

My mother explained the caste system to me when I was very small.

There were four castes, she said; priests, warriors, merchants and labourers, and we belonged to the highest: the Brahmins. I remember feeling as if I had just won a prize, gaining an introverted arrogance that remained with me as I became an adult. My superiority felt unassailable, upheld by centuries of tradition and institutionalisation.

But in my twenties, I realised that I, who hated racism with a passion, was descended from oppressors as brutal as any in human history.

Ambedkar: ‘The history of India is nothing but the battle between Buddhism and Brahminism’

Of course, I was not the only one to suffer from a shameful past. The British have the same problem, to which many respond with denial, preferring to extol the virtues of the Raj or the abolitionist movement than acknowledge the horrors of slavery and imperialism. I have also lived in Germany, where children are forced to confront their past at school, to wear guilt like a curse around their necks.

The attitude of Indian Brahmins seemed to be more like that of the British; there was a mumbled consensus that caste was wrong, but they had retained much of their privileges and sensibilities, in spite of changes to the law. That elderly relative, for example, who told me to get an English grandmother, had been chastising me for not having a sacred thread – a symbol of Brahminism, saying, ‘He is not a sudra,’ meaning a lower caste member. I wanted to tell her that had I worn that to school in Lancashire someone would probably have tried to garrotte me with it. I had always been on the receiving end of discrimination. I related to Ambedkar’s account of his childhood. I, surely, was not a Brahmin.

Thich Naht Hanh has something to say about this, as always beautifully expressed with his clear logic of the heart:

Thinking about this now, I realise this cannot be otherwise.

I grew up in England, but the British were in India too, and it is likely that, as Brahmins, my ancestors dreamed of being accepted by their masters, even as they endured the humiliations of colonialism. They would have altered their speech,their  dress and habits to match British ones; felt ashamed of their native ways. My paternal grandfather was a vet for British dogs. Surely the difficulties he experienced were the same as my father’s at his office, or my own at school.

The wrongdoings of Brahmins cannot be undone, or excused, but my practice of meditation has taught me that oppressors suffer deep psychological pain. I need only look to my own childhood for confirmation. I cannot remember one racist incident in which the perpetrator looked happy. Instead their faces were balled in anger, red with hatred and confusion. Being a racist is not fun, and the same must be true of being upper caste, for the greater the harm done, the greater the pain felt.

In three days time, I will try to open my heart to my ancestors, no matter who they were or what they did, just as I will open my heart to myself in spite of all my faults, for acceptance and forgiveness does not mean condoning evil; it means making your peace with reality, an entirely different thing.