Posted on August 21, 2016 by Rajeev Balasubramanyam 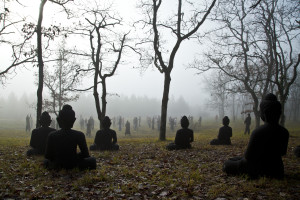 The final retreat I attended before leaving the US was the People of Color Retreat at Deer Park Monastery outside San Diego. When I first began my pilgrimage in 2014 this was my first port of call, and so it felt fitting that this should be my last.

But it was different this time. There were twice as many people, and the atmosphere was far more intense. I attribute both effects to recent events; to two years of watching YouTube videos of black people dying at the hands of police; to the work of Black Lives Matter which, via live protests and social media, has brought a suppressed reality into the light of public awareness; to the failure of Bernie Sanders to win the nomination and the anger felt by many at having to settle for Hillary as the least apocalyptic alternative; and to the threat of the apocalypse itself, Donald Trump, who embodies racist white America.

I was in the Bay area a week earlier. One African American friend refused to have Trump’s name spoken in her house, saying, ‘that guy scares the shit out of me’. Almost eighty years old, she did not believe racism in America had changed since her own childhood. If Trump were to win, she explained, the country would, in effect, be in the hands of the Klan once more.

A Mexican friend saw Trump more as a distraction, a chimera designed to deceive the populace into accepting the status quo in the form of Hillary Clinton, a point of view I heard echoed by other people of colour. Trump’s function, they said, was to terrify people, to cause them to fear a future so horrific that they became grateful for a present in which police had carte blanche to shoot the innocent, and migrants from across the border, whether legal or illegal, lacked basic civil rights.

I had visited the East Bay Meditation Center a week earlier where I saw a Black Lives Matter altar at the front of the dharma hall. They had held a special meditation to honour the victims of police brutality, a friend told me, to help process their own pain. It involved movement designed to release the trauma held in the body. Many broke down in tears, shaking and sobbing as they experienced the grief they had been holding inside. ‘It could have been me, or any member of my family,’ my friend said, explaining how he had fallen sick afterwards, not realising how deeply he had been affected, how he had numbed himself to  his own fear and anger and sadness as a means of self-protection.

I’d heard various expressions of political fear and  rage from white Americans since I arrived in the US, but the difference, perhaps, is that for people of colour this is hardly something new. We have always had to hold our emotions in, to suppress them out of necessity, for the system afford no other alternative. Whiteness silences. Whiteness suffocates. Whiteness punishes expression. But meditation, at least, offers a third solution between suppression and expression: observation. Observation, when practised with equanimity, leads to awareness, which leads to greater peacefulness, and for people of colour at this pregnant, pressurised moment in history, this feels like the only way out.

I arrived at Deer Park Monastery with friends I had met on the last retreat, talking, as we drove, about our pain, the difficulties were were facing, our deepest fears and struggles. This continued on top of the mountain with others, clear and sincere conversations, the result of friendships formed at this place where our defences were lowered, where we could see each other clearly through a lens of trust and love. I remembered that, two years ago when I arrived at this place, I was alone and anxious, hating all the singing and forced extroversion which pushed me outside of my comfort zone. I knew now that the borders of that zone were constructed by shame produced, in turn, by trauma, much of it multi-generational.

And so the retreat began as it had two years ago, with singing and walking meditation. I still did not like the singing, but this bothered me less because in the interim I had learned, to an extent, how not to identify with my suffering, how to observe my feelings from a non-localised point of view so that, from time to time, I could even smile at my own discomfort. But that was only the singing.

During that first night, I hardly slept, and the following morning I found this experience was common to almost everyone I spoke to. A friend offered the explanation that, as we entered this safe, meditative space, our suppressed emotions were arising to the surface causing agitation and restlessness. I agreed entirely with this wise observation; I’ve experienced it so many times on vipassana retreats, noticing its onset even before the course (a phenomenon which, I think, explains the conversation my friend and I had during the drive to the monastery).

From that morning onwards, as we meditated and walked in silence, I found my whole body becoming filled with rage and pain. Not only was the feeling almost overwhelming, but I could feel the same energy emanating from so many others, and when noble silence ended after breakfast several confirmed this was the case. Of course, all the anger wasn’t confined to the topic of racism. I’ve observed for years that anger always flows from one subject to the next without discrimination, that one can be furious about white supremacy one moment and then by the sight of someone smiling, or coughing, or, simply existing. Anger is human, and inevitable, but also fundamentally irrational. Anger is our wish for the present moment to be different, to be other than it is, and this is obviously impossible.

In my case, at least, I was becoming angrier and angrier about the fact that we all had to suffer in this way, that people of colour had had to endure such violent oppression. I thought about the war in Vietnam that had affected so many of the monks at the monastery, about the slaughter and continued humiliation of Native Americans, about the shooting of Philando Castile which had happened while I was on my vipassana course in Montreal, and I thought about myself and my family, about how much happier all our lives might have been were it not for racism, and colonialism, and the East India Company. And of course this was irrational too: the past is contained within the present moment, and it’s all set in stone, immutable. But on I went. On we all went. And the intensity seemed to build and build and build.

Though my own traumatic experiences, in both childhood and adulthood, took place in Britain, I knew instinctively that I didn’t need to fear feeling alienated from the experiences of others in the USA. The root cause was the same, the post-traumatic stress and fear and self-hatred generated by whiteness, that ideological construct which has been exported across the entire world, designed to concentrate power in the hands of those who believe themselves to be white.

Whiteness, by its nature, stifles protest and dissent, renders it dangerous and difficult, denies its own existence through force and brutality. I recalled the number of times I had said to myself, ‘I can’t take this anymore,’ and then had woken up the next morning, still breathing. I am certain that millions of others have said the same, and yet there we were, two hundred of us on that mountain top, still alive and still wanting to be happy, seeking a way out of this intense, relentless suffering, seeking to transform our pain and grief and rage and fear into love and compassion.

The theme of the retreat was The Path of True Love: Healing Ourselves. To many, myself included, this felt impossible,  a fool’s dream, and yet I continued to meditate, and to walk with awareness, and even to sing. It’s a feeling I’ve experienced over and over again, one I recognise now is essential to the path of dhamma. Amidst all this suffering we have to attempt the impossible, to aspire to that which cannot be attained, to seek mastery over the mind even when it feels we cannot experience a single breath in peace. 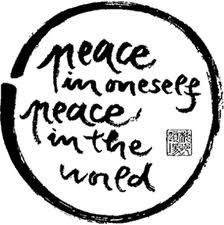