Posted on August 28, 2016 by Rajeev Balasubramanyam

I hadn’t slept that first night at Deer Park Monastery and was awake at 4.30, though meditation only began at 6. I didn’t care. I needed to meditate. It was a problem I’d had last time: amidst all the monastery’s activities, I couldn’t find time to sit my usual two hours. This sounds ridiculous, I know, but my intended solution this time was not to worry about it, to just devote myself to the timetable. But I hadn’t anticipated the level of agitation I would experience, the collective cloud of trauma, anger and grief that had formed so quickly on this baking mountaintop. Meditation is the only way I know to turn clouds into rain and so, abandoning my attempts at sleep, I left my tent and went into the dark hall, wondering how on earth life had led me – who used to smoke cigarettes to dispel my regular morning hangover – to this place.

After meditation we touched the earth, prostrating several times which, in contrast to last time, I found quite unpleasant and difficult. We then practised qi gong, which I enjoyed as it helped diffuse some of the anger, and after breakfast and service meditation (separating the trash, for me) we had our first dharma talk by Brother Larry Ward, the man responsible for establishing the People of Colour Retreat and one of the founders of the monastery.

Deeply inspired by the life of Dr. Martin Luther King, Jr., Larry has spent his life committed to non-violent social change, healing, and transformation on a global level. He served on the staff of the Ecumenical Institute and Institute of Cultural Affairs for twenty years as director, academy dean and master teacher.

The previous evening I’d been talking to a friend about how American Buddhism had taken on so much of the aesthetic of American Christianity, about how the Sunday service at New York Zen Center had felt, to me, very much like sitting in a church (a feeling I didn’t much like after the punitive services I’d had to sit through at my C of E primary school). Larry Ward began by saying he wouldn’t be doing much sitting down; he had to stand and talk because he was raised in the Baptist Pentecostal tradition, and he proceeded to begin exactly in the manner of a fiery preacher. Had it been in another language I’d have assumed he was telling us all we were going to hell, but in fact he was talking about loving-kindness. It’s ironic, because later he told us how a dharma student should never be misled by the personality or the words or a teacher. But his American aesthetic was important too:  Buddhism is syncretic and malleable, has always mingled with whatever culture it has landed within, whether in Tibet, Japan, or China. So why not in America? More importantly for us, Larry Ward was able to relate Buddhism to the experience of people of colour in America. We needed this.

He began by saying that it wasn’t only people of colour who were traumatised by racism. All white people, he said, were traumatised by it too. I understood this. Days ago a German friend was saying how every German, when they are around 11 or 12, learns about their history, about Nazis, and becomes traumatised. Back in June, in Vermont Studio Center, an African American artist had showed us his photographs of lynchings with the black people photo-shopped out so we had to focus on the white people, on who they were, on how they were. In Britain, the denial is stronger than in Germany (where denial is illegal) but British people know. They know their country was built on colonialism and the slave trade. In fact, they feel it most keenly when they’re denying it, because guilt is a reaction to trauma too; it produces wild, irrational, often violent reactions, like twisting a knife out of one’s own gut and into another’s.

As I learned last time at Deer Park, however, we simply cannot escape our ancestries. We are our ancestors. We are our parents. Our parents’ trauma is our trauma. And this applies to white people too. How could it not? The moment one identifies as white, one identifies with a history of genocide and violence, and there is no way out of this, just as, for People of Colour, there is no way out of our histories of oppression and humiliation.

It’s a spectrum, Brother Larry continued. We all feel hate and anger (raga); we all crave (tanha), and we are all subject to moha, which is usually translated as delusion, but could also be indifference, or numbness. But with the practice, we can move across the spectrum. He illustrated this by explaining how as a young man he had a T-shirt that read, ‘I’m the meanest son of a bitch alive,’ while his T-shirt now read, ‘I am a river’.  I related to this, had been thinking the same thing in the dharma hall about how troubled and cynical I used to be.

Darwin is misunderstood, said Brother Larry. He didn’t say survival of the fittest. He said survival of those best adapted to their environments. And when it came to the human species, this was people of colour.

The moment he said this, before I had time to think about it, I found myself crying. I understood it so well. I had never wanted to change. I had had to. And change was painful, had felt like dragging my body over hot coals for the first few years. What I wanted was to feel loved, and safe, and accepted, but I didn’t get this, so I had to adapt. Adaptation was surgery without anesthesia in a response to the initial wound which was mutilation without anesthesia. I had never asked for this. But looking around the dharma hall, I suspected very few of us did. On the other hand, how many of us would have been there had we not been scarred? I can’t bring myself to say that I’m grateful for racism. I just can’t. But maybe I will one day.

Brother Larry listed some of his traumas. He had been shot at by the police when he was  eleven for playing baseball in the wrong spot, pursued by the Klan, and recently, his home had been firebombed by racists. He had gone straight to Plum Village, and to Thich Nhat Hahn, who told him, ‘Do not direct your energy there.’ 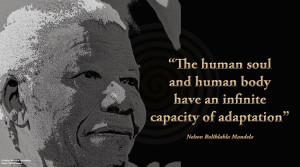 This, I was grateful for. I recognized it immediately as great wisdom, though it took weeks to process. At Deer Park a bell rings at random intervals during the day when we stop what we’re doing and direct our attention to the breath. I have put such an app on my phone (Mindbell). Only days ago, I was  thinking about the Muslim woman on a beach in France, forced to take off her clothes by the police, and found myself saying, ‘Fuck you’ to imaginary cops. And then the bell rang. I stopped, observed my breath, and looked out the window. There had been a violent rainstorm earlier and now sky was incredible, a fractal composed only of blacks and greys even though it was still daylight. I directed my attention to this, and later, when I was calm, I sat to write a piece on the burkini ban.

Sometimes tanha is translated as craving, sometimes as clinging. I think clinging can also be understood as the mind’s tendency to obsess, to grasp at the negative, to close its fist around this darkness. ‘Don’t direct your energy there’ does not mean ignoring reality or becoming apolitical, but not engaging in repeated acts of psychological self-harm, not reliving our traumas over and over, not trapping ourselves in a misery loop. This sounds easy, but to not direct one’s energy there after a traumatic or painful event takes tremendous control over the mind. But I believe it is possible.

Now, every time my bell rings, I go back to my breath. I find myself going there even when the bell hasn’t rung, and for longer and longer periods of time. Misery still comes, pain and anger still come, but I can move on more quickly, retain my calm for longer, all by not directing my energy there. It’s a lesson I will have to have to learn and re-learn, but I am coming to believe that this is the essence of all wisdom — to know where to direct our energy. 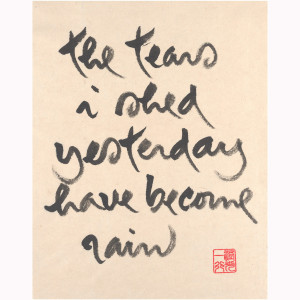