Posted on September 11, 2016 by Rajeev Balasubramanyam

Continued from American Pilgrimage #32 (On my experience at Deer Park Monastery, People of Colour Retreat, 2016).

On the afternoon of Day 1, I had a long talk with a friend about a piece I’d read  by Ronald A. Kuyenda about the antidialogical nature of whiteness. ‘You just blew my mind,’ my friend said,  and I nodded. I’d felt the same when I read the piece. I realised how many years I’d spent attempting to discuss racism with those beholden to the logic of whiteness (white or p.o.c), and how futile the exercise was. The reason is this: race is a construct; it has no ‘actual existence’, and yet the world is structured according to its logic; therefore, arguments defending racism cannot be rational, because there is no rational defence of racism.

As a result, defenders of whiteness resort to an apparently inexhaustible supply of irrational statements, which the interlocutor has to deconstruct (there was a twitter hashtag called #whiteproverbs designed to expose this and, in a spectacular piece of antidialogic irony, thousands, including the BBC, responded by accusing its founders of racism). When I used to engage in these conversations I would finish exhausted, frustrated and dispirited, as if my opponent had flung me a Sudoku puzzle, followed by another and another, which I sweated over while they watched.

Today, I am very careful regarding with whom I speak about racism (including to whom I mention I’ve attended a people of colour retreat). Racism isn’t a subject I ‘like’: to me, it’s a word laden with centuries of violence and brutality, and these antidialogic responses are a part of that history and present day reality. I have not yet healed sufficiently so that these responses do not hurt me, but I have healed to the point where I have the wisdom not to seek out these conversations. I have learned the importance of protecting myself, and I have learned that I am not under any obligation to engage in these anti-dialogues (another myth of whiteness). 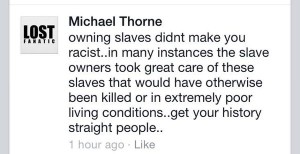 I mention all of this primarily because of what happened in the sharing sessions later that day. We split into six families, each named after people of colour who had died recently. Mine was ‘Remembering Sandra Lee Boggs’ a compound of Sandra Bland, killed in police custody in 2015 after failing to signal while changing lanes, and Grace Lee Boggs, the writer/activist who died last year just shy of her 100th birthday. I enjoyed the sharing sessions less this time as there were twice as many people, which made it far less intimate, but as always I was inspired by the ability of others to speak so sincerely from the heart. I realised that the more honest we are able to be, the more evident our common humanity becomes, the more able we are to recognise that the things that divide us are constructs, whiteness and patriarchy included.

One young woman began to cry when she spoke about trauma. She did not go into the details, but I almost did not need to know. I related. I also cry because of trauma, so feeling love and compassion for her was easy. As Larry Ward said, hatred builds categories, love dismantles them. However, as one member of our group pointed out, these constructs have a huge impact on our lives, and I knew that once I returned to the world I would have to face them, for the outside world doesn’t function like a sharing circle at Deer Park monastery.

In a sharing circle there are rules to ensure gentle, loving, respectful discourse. It used to be called Dharma Discussion, but the name was changed to Sharing to emphasise that we were not there to contradict or advise but to speak about our experiences, which had the effect of revealing our shared humanity as opposed to inviting competitive, ego-based responses.

At the beginning of the retreat, one of the organisers had said that monks or lay residents of the monastery who identified as white had agreed to step back and give up the space to us, though they would help by working in the kitchens etc. I felt moved by this. It didn’t suggest division to me but it’s opposite: commonality, common cause. These white allies were helping to realise a space in which people of colour did not feel secondary or like minorities, felt safe, felt like the space was theirs. I was grateful for this.

I didn’t realise that there actually were two people on the retreat who identified as white and had signed up as allies, permissible if there was space. But later, after Sharing, I learned that there had been incidents involving these individuals in their respective families. One had shouted at the group, telling them they had to help her to find her community, to find who she was meant to be, railing at them for not helping her. A friend had responded by saying that he cared for her, and her obvious pain, but that she was taking over the space in a way which disrespected the rules of the group. Others said they were feeling unsafe, that they did not feel comfortable enough to share now.

The second individual shouted at the group too, but aggressively (instead of passive-aggressively) saying, ‘I’m sick of you all talking about racism. It’s not just you. I have had racism from blacks and Mexicans. If any of you talk about racism, I’m going to point you out!’ Some of the younger members of the group began to cry after this; others were silent throughout. I had been disappointed by the first anecdote, but this was shocking, and it was very sad to think that some of the younger retreatants might leave having had negative or even retraumatising, experiences. As for me, my safe space did not feel so safe anymore.

The following morning the organiser announced that those two individuals had been asked to leave the retreat, intimating that from now on, these retreats would be for people of colour only. She was telling us, she said, because she wanted it all to be open, that there were no secrets here, and this, I realised, was essential. She was not afraid to do this. She knew she was doing the right thing. Later that day, during Sharing, several more monks joined the families that had been so troubled the day before, showing great concern for all , focusing on the core need — to heal, the reason we were all there in the first place.

I remembered seeing two monks hugging one of the women who had left the previous evening, comforting them, and I felt great love and respect to them all for dealing with the situation so calmly, compassionately, and fearlessly. I myself had felt a stab of fear if not guilt, when I heard those two individuals had been asked to leave, and now I realise why. I think people of colour have been trained to put the needs of white people first, and in my head there was an oppressive, bullying voice telling me I was a racist for being there,  warning me those individuals might return to punish us, accusing us of discrimination, or even terrorism!

My conditioning was the product of years of bullying and intimidation which had led a part of me to believe that white people are more important than people of colour, more important than myself, to believe they had a right to dominate. It is a view shared by many, and there’s even some comfort in it. It stops us having to confront one’s outrage, our trauma, the pain of injustice, the need to do something about it.

I remember when I was ten standing in a row of mostly working-class people in Lancashire and waving a flag at the Queen as she passed in a Rolls Royce. I remember the joy and jubilation that most people expressed. It was reminiscent of how so many Indian women have been trained to view their husbands or son-in-laws as divine, to take so much pleasure in subordinating their own needs to theirs. It takes courage to break these binds, and it takes love, because, finally, this relationship isn’t healthy for anyone. As Larry Ward said, white people are just as traumatised as we are, and this was evident from those two explosions that took place within the sharing groups. The hierarchy had proved itself harmful to all of of us, proving that dialogue about racism cannot take place until both sides heal their own wounds sufficiently.

That evening, when I returned dharma hall to meditate, I focused on my breath, determined to do as Thich Nhat Hanh advised and ‘not to direct my energy there’. I needed my energy for myself, to heal, and I was thankful that I still had a safe place to do this. 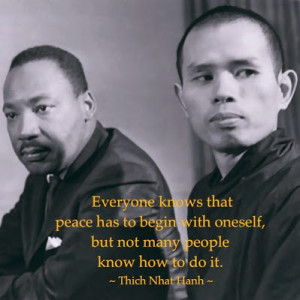