Posted on October 2, 2016 by Rajeev Balasubramanyam

Continued from American Pilgrimage #32 (On my experience at Deer Park Monastery, People of Colour Retreat, 2016).

Day 2 began with a walk. All 250 of us headed up the hillside at dawn, stopping in front of a large statue of the Buddha where the monks conducted a short service. But I could feel anger inside me. And I could feel it all around me, building. It was an old anger, but the circumstances were new. We were all here together, people of colour, on a retreat whose purpose was to heal. This in itself, our collective presence and intention, constituted an acknowledgement of the First Noble Truth, the truth of suffering. And this, I believe, was the cause of the anger. Finally we were removed from society, from our obligations and pressures, and could look at ourselves, at our histories, and acknowledge that as humans, and as people of colour, we had suffered, and though the cause of suffering lay in our own minds, the anger was an awareness of the injustices that had befallen us all. On this baking mountaintop the anger felt like heat gathering, accumulating, settling inside the bowl of the sky. Only rain could bring the temperature down, but first we had to see it, to experience it.  Without awareness, there can be no healing. I have learned this.

Larry Ward, later that day, spoke about ‘serene reflection’, which I suppose is what we were doing. None of us were shouting, at least; no-one was running down the mountainside. Instead we were observing our breathing, smiling and bowing to one another. It is no wonder then that the anger was building. As Larry Ward said: ‘Serene reflection leads to non-serene discoveries.’

That evening the Reverend Angel Kyodo Williams echoed much of what I’d been feeling, that with each passing hour we were, collectively, beginning to appreciate the scale of the trauma we had experienced. The violence and abuse committed against people of colour was unbelievable, she said, so we were used to seeing it and denying it at the same time. And that denial is reinforced by whiteness. If it’s hard for people of colour to accept the harm done to us by white people, it is surely harder for white people to accept.

This was proven by the previous day’s drama in which one white person had tried to seek immediate absolution, hoping that by crying or asking to be hugged she could make the problem go away, or by ‘debunking to absolute reality’ — making statements such as ‘we are all human’ — one can deny the construct of whiteness and its effects on jobs, safety, incomes, and education. Another white retreatant had sought to suppress talk of racism by intimidating the group, hoping to shield herself from her own trauma this way, her own shame. As Reverend Angel Kyodo Williams said: ‘When we suppress something in ourselves, we try to suppress it in others’. This isn’t always a conscious act, she said; ‘often we can’t make sense of our behaviour, we feel out of control, we feel afraid of ourselves, and so we try to shut others down.’

But this does not only happen among white people. People of colour frequently try to shut down such talk too, unable to face their own traumas, their own feelings of shame. But if we want to heal, said the Reverend, we can’t stop talking about our pain: we had to accept our own reality, our own humanity, and this was why we were here, in this monastery, at this retreat. As another speaker would say, we created the label People of Colour to label our pain.

As I have discovered personally, a clouded mind is liable to accept another’s version of reality, or of themselves, often drawn to the argument delivered most volubly, or from the most rooftops. Even after I intellectually rejected whiteness, and capitalism, the two dominant ideologies in western society, I found myself drawn to the worldviews of others without knowing my own mind well enough to have something to verify them against. This, I believe, is the reason why fundamentalisms of all kinds, religious and political, are so successful, the reason why we look to cult leaders or politicians to save us, to Trump to ‘make America [meaning ourselves] great again’, or to Hillary to save us from Trump. Because there are large voids, or clouds, obstructing our self-awareness; perhaps  we are incapable of serene reflection, perhaps our minds are too agitated, too unstable, too flickering, too afraid.

The dharma helps us resist this. Once we begin to know our own minds, we become less susceptible to the worldviews of others, less receptive to bulling or brainwashing. Oprah has a question she is fond of asking her interviewees, a question I’ve been trying to answer — ‘What do you know for sure?’ I asked a ten year old this recently and he said, ‘Nothing’, his face perfectly deadpan. This is how I feel much of the time, but there are also times, usually after practicing, when the emptiness yields, when I can feel my own loving nature, my own goodness, when I know for sure, or almost for sure, that this is who I am. And then the critical voices returns.

When people speak of a cosmic struggle between good and evil, I believe this is what they are talking about, that dialogue between the angel and the demon, between Jesus and the devil, between the Buddha and Mara, between all of us and our doubts, our demons that chip away at self-esteem which, I suspect, is the same thing as self-knowledge. And when our self-knowledge is incomplete, we become susceptible to the voices of those critical demons, be they parents, teachers, friends, competitors, priests, or politicians. We allow others to tell us who we are, that we are less than whole, less than lovable, less than good. 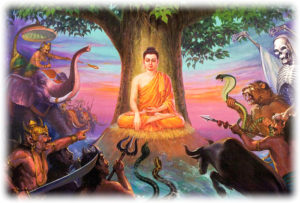 When we allow ourselves serene reflection, the results are often terrifying at first because we learn that we don’t like ourselves. Certainly, this was my first, big realisation after I began to meditate, a realisation I kept repeating while crying as I’d never cried before. But once we can accept that realisation, hold it, look at it, we can go deeper, come to better understand this thing we call our self, and understand there is nothing evil or unlovable or’bad’ about it. Instead of simply believing those voices that say  ‘You’re bad’, ‘You’re stupid’, ‘You’re useless’, ‘You’re ugly’, we begin to hear them, to realise they are not our own voices, and this is the beginning of healing. My hope is that ultimately we can all reach a stage wherein we discard those voices completely, wherein we love ourselves fully. I haven’t got there yet, but this is something I hope to know for sure.