Posted on October 30, 2016 by Rajeev Balasubramanyam

Continued from American Pilgrimage #32 (On my experiences at Deer Park Monastery, People of Colour Retreat, 2016).

On Day 4 we hiked up a mountain. We did this on the last retreat, in 2014. This was the day I met my 78 year old friend responsible for my (inadvertent) consumption of (half) a marijuana cookie, a friendship that means the world to me now. And it was there I’d had a long and memorable conversation with one of the oldest monks whom everyone called Young Brother.

I remember him telling me how he’d had three lives, first as a stockbroker, then as a Christian priest, and finally as a Zen monk. The line from the Bible that most resonated with him was, ‘The kingdom of heaven is within’, and this caused him, ultimately to turn towards Buddhism. He advised me to go to Plum Village, to spend some time with Thich Nhat Hanh: ‘I truly believe he is the living Buddha, the living Christ, or our time,’ he said. But since that conversation Thich Nhat Hanh had had a severe stroke and Young Brother had died, only the night before, while we were having dinner.

It was also while we were on that mountain, two years ago that Michael Brown was shot in Ferguson Missouri. It was this, together with the acquittal of George Zimmerman the year before, that propelled Black Lives Matter onto the national and international stage to the point where near everyone, American or not, had seen footage of black people being murdered by police. This, I was certain, was one of the reasons for there being twice as many people hiking up that mountain now than in 2014, and for the thick fog of anger surrounding us all.

There had been all these changes in only two years. But it’s one of the basic truths of Buddhism: anicca, impermanence. 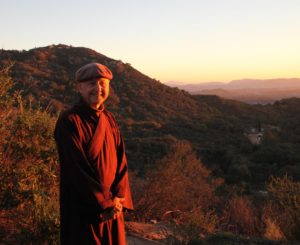 This year, when Noble Silence ended, I began speaking quietly and softly with a new friend, about the things that had led us to where we were now, about our hopes for the future. But our conversation was broken quite suddenly when numerous people from behind began shouting, telling all the ‘LA people’ to congregate here, and all the ‘Oakland people’ to congregate there, for group photographs amidst much whooping and cheering (‘LA! LA!’ and so on). I, as the only non-US resident, was left on my own, though luckily another close friend who was equally uninterested in the cacophony  came and sat beside me.

It wasn’t just the fact of my physical exclusion that bothered me; there was a sense of cultural alienation too. In America (though this is hardly unique to America) the celebration of identity is a powerful cultural phenomenon. I’ve never liked it. To me it’s always a sign of insecurity, to the extent that it becomes an obligation. I’d go so far as to say that this is the totalitarian side of American culture, though many are unaware of it. But this is only natural: it has its roots in school and in summer camp. It’s there in Friday night football, in cheerleading, in the compulsion to separate into teams and raise mascots and chant and sing. There are positive aspects to  these activities too, but I believe they all have a role to play in weakening individual awareness.

It’s a forced extroversion too, and therefore inevitably discriminates against introverts. I once read there has only ever been one introvert President, and that was Nixon. I’m not trying to propose that Nixon become the standard bearer for introverts, but only that obligatory extroversion is a requirement of an increasingly nationalistic and self-aggrandizing culture. Something similar was and is present in British boarding schools too, the training grounds for empire, a less extrovert but equally totalitarian culture.

I had enjoyed the sharing groups in 2014 more than in 2016  because there had were fewer people, so it had felt more intimate and authentic; I’d felt safer. In fact, group sharing, is arguably a singularly American practice, finding its ancestry in Alcoholics Anonymous, and the confessional culture Oprah helped universalise, but it’s a conscious practice, almost by definition. But on that mountain with 250 people shouting out local affiliations, I felt I was in the presence of something unconscious and automated, and this left me a little depressed.

It hadn’t helped that during last night’s touching the earth ceremony there had been a certain amount of rhetoric about ‘this great country’ and ‘this great economy’, which I’d interpreted as needless nationalism (though others disagreed). Moreover, after we had made our way down the mountain, a friend introduced me to a woman from LA saying, ‘He’s from England, but we’ve adopted him into our Oakland group,’ which I found a very kind and loving statement. I told her I liked LA, to which she responded, ‘Stay where you are; we’ve got too many people here already.’ At this point, I was still reeling from Brexit, and was hurt to hear anti-immigrant sentiments at a People of Color Retreat, where I last expected them.

For that evening, the monks had planned a ‘be-in’, where each family would present a skit or sing a song or do a dance. It felt like an obligatory group requirement, which hadn’t been the case last year, and as the whooping and cheering had continued for much of the day, I knew I had reached my limit and needed to separate from the group. What I really wanted to do was to mediate, and so later that night, when everyone gathered in the Dharma Hall, I slipped away to the yurt and meditated for two or three hours. It was lovely, peaceful and focused just as I had expected it to be in this place (this was the first time I had done any really deep meditation at Deer Park). Later, when I took a walk through the now silent and dark grounds, I realised this place was indeed a traditional Buddhist monastery, but it had gone out of its way to accommodate modern, western lay people. 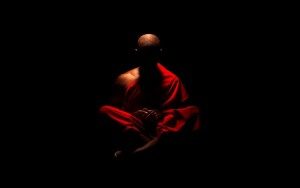 It’s something I hugely admire the monks for: they never attempted to  contradict the prevailing culture. Instead they accommodate it, walking towards it with open arms which enables others to walk towards them. But I, of course, was possessed of less serenity than the monks, and had to go away. Nonetheless, as I walked around the monastery listening to the laughter and drumming from the dharma hall, I felt only goodwill for the people there, and, most importantly, I felt I still belonged to the group, which might not have been the case had I remained.

The lesson I learned is that we will always have disagreements, cultural or political clashes, but we can’t lose sight of our common humanity, though sometimes, we have to separate  to remember this. After all, monks spend years in caves, cut off from everyone, and all I’d done was to take the evening off, but it was enough. I think it had something to do with regaining my balance, and my sense of autonomy, faculties that are of tremendous importance for all people, but particularly for Americans right now.

Whether Trump wins or loses, hysteria will surely follow, angry recriminations, or mindless celebration, and these things, in my opinion, are ways of deterring democracy in its truest sense, by limiting our self-awareness and autonomy. This is why I feel meditation and introspection are so beneficial to Americans today, in spite of all the nd talk of capitalist spirituality and cultural appropriation. Valid as these critiques may be, I still believe that the fact of simply being in a monastery, of sitting and walking in silence, will prove far more important in the long-run.

I don’t believe that progressive cultural shifts occur because of powerful leaders or strong emotions: I believe they occur because of increased awareness, without which action becomes meaningless or even counter-productive. I can only hope that we can focus on developing inner stillness and equanimity in ourselves rather than joining in the hysteria outside, because it’s these qualities that will ultimately determine our future, and not the results of the election. It has taken me a very long time to realise this but, to use Oprah’s phrase, this is one of the things I know for sure.

The View from the Mountain Top