Posted on December 11, 2016 by Rajeev Balasubramanyam

Continued from American Pilgrimage #32 (On my experiences at Deer Park Monastery, People of Colour Retreat, 2016).

Sunday August 7 was  the last day of the People of Color Retreat, and my last day in the United States. It was also 3 months before the election, something we all seemed to be aware of, every minute, every hour. As people of colour we knew what a Trump victory would mean, but we also knew the playing field would not go from good to bad, but bad to worse. And 3 months later, when those dark waters did break, the hysteria did not come from us. In any case, on our programmes, where it read 5.15. wake up, it also read, ‘Waking up this morning I smile — 24 brand new hours are before me.’

Trump or not, we were not there to despair. It was the ethos of this place, that “happiness is here and now”, regardless of circumstances. And no matter who the President is, there will be no final reckoning, no day of judgement or last battle. Our species would go on after our deaths (unless the worst really does come to the worst) and the essential struggle can’t be framed politically, or even in moral terms. It’s about something simultaneously simpler and deeper, the theme of the treat: “The Path of True Love”. 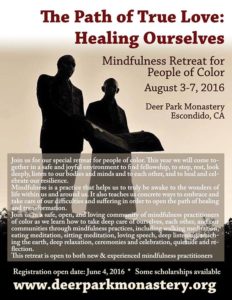 The day began with a ceremony, the transmission of the Mindfulness Trainings. I had done this last year, kneeling and bowing as each training was recited, a tremendously moving experience, but having done it before, I was content to watch the others. After it was over, a member of my dharma family came over to me. He had been speaking, in our sharing group, about how it was so hard for men to cry, how he envied the women who cried so freely in our sessions, but now his voice cracked as he turned to hug me. This made me laugh, but it also made me happy. I remembered a similar feeling 2 years ago, as if something in me had broken down, as if in place of all the criticism and disapproval, an entire community had expressed their faith in my good and loving nature. I think if communities and families everywhere were to do this today, the world would be a very different place.

After the ceremony, there was breakfast and walking meditation, and then the closing session of the retreat, a question and answer session.

Most of the questions were about how to merge our spiritual practice with social and political reality. There were many about anger — an unofficial theme of the retreat. ‘Black Lives Matter shone a light on what so many of us already knew,’ one said, while another explained how he wanted to have an open heart to his white brothers and sisters, but it was hard to challenge whiteness with love, especially when so many white people refuse to admit there is a problem, refuse to address their own pain and ignorance, even in meditation sanghas where the response was often a zen smile of transcendence which in fact concealed indifference, or hostility.

The Reverend Angel Kyodo Williams, and Zenju Earthlyn Manuel answered from the stage, together with two monks from the monastery. Zenju began by saying that the purpose of a POC retreat was not to politicise the dharma, but to include the political within the dharma. ‘We were not born POC’, she said, but became it by having to grapple with whiteness, schools, police and the racisms that have restricted our access to the world.  ‘We don’t suffer the absolute’, she said. ‘We suffer the relative. We don’t suffer that all lives matter; we suffer that black and brown lives are not mattering. We suffer in the bodies that we have.’ 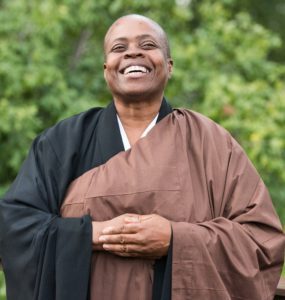 The Reverend Williams added that we need to honour our suffering, not run away from it or try to ‘get over it’. Just because we feel pain it does not mean we should be better, and if we try to feign transcendence, to ‘Buddhize it’, we are only recreating the wheel of suffering. The suffering does not disappear; instead, we  we arrive at a place where we are able to smile at our own suffering, to relate to it rather than objectifying it as bad. ‘Only the wounded healers are able to heal.’

‘There is far too much focus on what white people can do for us,’ said the Reverend, and the term ‘allies’ only reifies a position of power; that we are down here and they are up there. ‘The work for white folks is to do their own work,’ she said. They are distracting themselves by trying to ‘give scholarships to people of colour’, ‘signing a cheque for our silence’, and only extending their own suffering by avoiding the deep emotional work required. ‘Don’t wound yourselves by getting into conversations about race with white folk if you haven’t healed yourself first,’ she said. ‘In fact, you don’t need to ever do it. We need to liberate ourselves even from the idea that there is something to liberate ourselves from. Some of us are activists, but for some it is enough to be kindergarten teachers, or architects, or to have a good sense of fashion. We don’t all have a place on the frontlines. But we all have a place on the frontlines of our own suffering, and that is enough.’

When I heard this last line I found myself in tears. Until that moment I had been nodding, taking notes, raising eyebrows, but suddenly I felt released, released by love. I had spent so many years getting into fearsome conversations with white people on the subject of race, arguing in panel discussions on stages, or over dinner tables or in bars (thank god I stopped before the era of Internet debate). In my twenties I devoted hours which would have been better spent sleeping, to deconstructing all the non-sequiturs in defence of whiteness, all the gaslighting. I had no idea how much I was hurting myself, retraumatising a mind that needed the coolness of rain, not more fire. The problem was that I didn’t love myself enough, had been turning myself into a martyr, believing my own wellness to be of little value beside the struggle, never quite realising that my own essence was not that of a fighter but of a human who needed love, that I could never be an effective warrior, in any case, until I healed myself.

It was only over the last ten years, after I began to meditate, that I learned self-care, had therapy, sought out loving company, gave up smoking, began to exercise, eat well, drink water instead of whisky. My writing and political engagement did not stop, but I began to put myself first. What the Reverend Angel Kyodo Williams was saying, however, the monks too, was far more radical; that I did not need to do anything at all other than be happy. This ran contrary to everything I had ever been told, which was that happiness and selfishness were the same thing.

When the session ended I went to pack my things and to say goodbye to so many friends, old and new. The following morning, I landed in New York where I spent the day with a friend from university before flying to London. I had hardly slept on either flight, and remember little of that day in Manhattan, of what we did. All I remember how good it felt to be with an old and much-loved friend, and how at the end of my life it would be moments like these that I would value, not my successes or awards or victories, not the times I’ve been vindicated or proved myself ‘right’. We live in a competitive world, but competition has never made me happy. Friendship has made me happy. Love has made me happy. I’ve always had these moments of happiness, but thanks to meditation they have been more and more frequent, mostly because I have learned how to steer myself myself away from paths that are bound to lead to suffering.

I learned this lesson once more as I readied myself to fly out of Newark and was told that my name wasn’t on the system, that I needed to rush to a different terminal and show them my passport to have any chance of flying. What I wanted to do was to start shouting  (I hadn’t slept for forty-eight hours) but somehow I managed to control myself, observe my breathing, ask them to repeat what I needed to do, smile at the woman, and eventually, I did get on that flight. I have my practice to thank for this. What could have been a dark moment, was only a little grey.

A lot of people ask me what meditation is, and I don’t always know the answer, but I think it is an act of looking. There are some things we can only see in silence, only see when we are still. What we do see can be terrifying at first, especially if we have lived for a long time without looking, though to go on like this is too exhausting in the long-run, at least for me, too unsatisfying. It’s very rare that I know how to live in the material world, and when my plans do come off, which is even rarer, they invariably take me to a different place to the one I had believed they would. The only tool I have that never lets me down is meditation, and as I sat on the plane and closed my eyes, I was relieved that I didn’t need to be in America, or any particular place, to do it.

The world may be getting worse, but the contents of my mind are still essentially the same: there’s fear, anger, and hatred, and also some spaces in between where I can feel calm, feel sure; peaceful, spaces where love can enter. This is why I do it. I live for these spaces now. Perhaps we all do. But if it wasn’t for meditation, I’d never have known they were there in the first place. 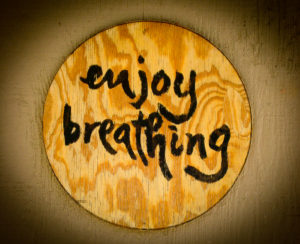