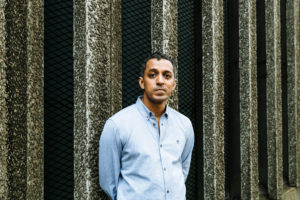 Rajeev Balasubramanyam’s first novel, IN BEAUTIFUL DISGUISES (Bloomsbury 2000) won a Betty Trask Prize and was nominated for the Guardian First Fiction Prize. In 2004 he was awarded the Clarissa Luard Prize for the best British writer under the age of 35. His latest novel is PROFESSOR CHANDRA FOLLOWS HIS BLISS (Chatto & Windus/Random House 2019) which is translated into six languages and was the Bookseller’s book of the month in June 2019.

Rajeev holds a PhD in English, and degrees from the universities of Oxford and Cambridge. He has lived in  London, Manchester, a remote Suffolk beach, Berlin, Kathmandu, and Hong Kong, where he was a Research Scholar in the Society of Scholars at Hong Kong University. He was a currently a fellow of the Hemera Foundation from 2014-16, for writers with a meditation practice, and has been writer in residence at Crestone Zen Mountain Center and the Zen Center of New York City.

He has recently launched a podcast called BLISSFUL THINKING, in which he interviews people of colour about their spirituality.